If you want to give the impression that you’ve been using Windows 10 for years, learning a few keyboard shortcuts is the best way to go about it—you can navigate around the interface, get apps in position, trigger events, change settings and more with a couple of taps on your keyboard. Here are the shortcuts we’ve been finding most useful.

Window snapping has changed slightly in Windows 10 and so have the shortcuts. App windows can be snapped to either side of the screen, as in Windows 8, but you can also assign them to quadrants and get four windows open on screen simultaneously.

Windows Key+Up — snap the active window to the top.

Windows Key+Down — snap the active window to the bottom.

Bonus: Whenever you snap a window to a side or a quadrant, Windows will automatically suggest you pick one of your open apps to fill the remaining real estate on your desktop.

Official support for virtual desktops is one of the most exciting new additions in Windows 10—unless you’ve been developing a third-party utility to do the same job! It’s kind of like having extra invisible monitors. Each desktop can have its own set of apps but shortcuts and wallpaper are consistent across the board.

Windows Key+Ctrl+Left — scroll through your desktops to the left.

Windows Key+Ctrl+Right — scroll through your desktops to the right.

Windows Key+Tab — see all your desktops (and open apps!) via the Task View page.

As you’ll know by now, Cortana has arrived on the desktop. If you don’t feel entirely comfortable shouting out “hey Cortana!” across a crowded room, then there are keyboard shortcuts that can help—once Cortana is active, you can choice voice or keyboard input.

Windows Key+X — open the Start button context menu (the one with easy access to a host of common computer management features—like the Command Prompt below).

Shift+Left — highlight text to the left of the cursor.

Shift+Right — highlight text to the left of the cursor.

Ctrl+Shift+Left (or Right) — highlight blocks of text instead of just characters at a time.

Ctrl+V — paste text from the Windows clipboard into command prompt.

Ctrl+A — select all text after the prompt.

These work in other text-based applications as well, but they’re new to Command Prompt.

Finding your way around 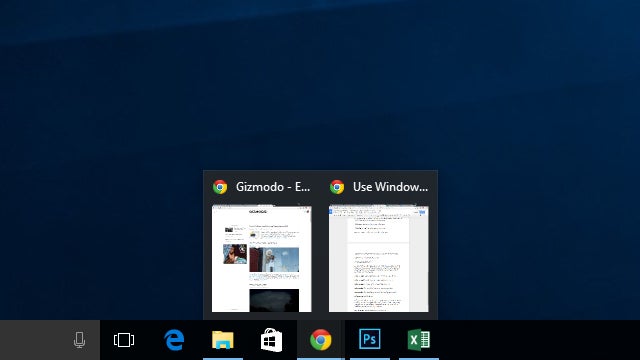 Besides all the new Windows 10 keyboard shortcuts, there are plenty of old classics that have survived successive versions of the operating system and are still going strong. Here are the combinations you’re going to need to navigate around the interface.

Windows Key+D — minimize apps to go straight to the desktop.

Windows Key+L — lock your PC and go to the lock screen.

Alt+Up — go up one level in File Explorer.

Alt+Left — go to the previous folder in File Explorer.

Alt+Right — go to the next folder in File Explorer.

Alt+Tab — switch between windows. (Hold down Alt while tapping Tab to pick visually).

Windows Key+Shift+Left (or Right) — move a window to your next monitor.

Windows Key+Any Number Key — open the app pinned to the taskbar in the numbered position (e.g. Win+2 launches the app in your second taskbar slot)

Unlock parts of Windows you never knew existed: Here are the shortcuts you need if you want to go way beyond the surface of the software into settings and options that would otherwise be difficult to find. Don’t click on anything unless you know what you’re doing.

Shift+Delete — delete files without sending them to the Recycle Bin.

Alt+Enter — show the properties of the currently selected file.

As you would expect, Windows 10 is a very visual OS and there are keyboard shortcuts to help you capture screenshots, record on-screen activity and zoom in and out. Note that to use the Game DVR recorder app you’re going to need a decent graphics setup installed.

Windows Key+PrtScr — take a screenshot saved to your Pictures folder.

Windows Key+G — open the Game DVR recorder (if supported by your graphics card).

Rename This PC to My Computer in Windows 10

How to install Windows 10

How to Make Your Windows 10 PC Boot Faster

Get this widget at CodeCanyon

ABOUT US
Here you can find help about most troubles in Windows 10. How to install or uninstall software, to tweak visual style, to reach better security level.
Contact us: [email protected]
FOLLOW US
© 2018 Windows 10 Manual
MORE STORIES

Windows 10 19H2 Update: Everything you need to know